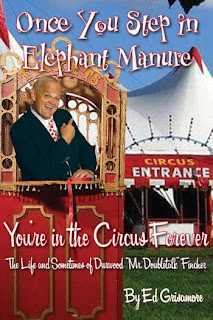 Many years ago a doubletalk artist came to Reynolds, GA to speak to the Kiwanis Club annual banquet. Just in case you don’t know, “doubletalk” is the art of using nonsense syllables along with recognizable words in rapid patter. In other words, the listener does not have a clue what in the heck the double talker is talking about.

The speaker came to town under a fictitious name and was introduced as an expert in growing the economies of small communities (or something like that). Club secretary Cat Brady was trying to take notes on the content of the speech for the monthly newsletter. She was helpless and quickly gave up. A few caught on and started laughing. Others got upset because they thought the ones who were laughing were making fun of the guest speaker.

And some of those who were upset never even knew they had been had.

I have wondered for several years if the speaker that night was Durwood Fincher from Macon, GA as he was beginning his entertainment career and before he became nationally known as “Mr. Doubletalk.”

When my friend, Ed Grisamore, told me some time ago he was about to write a book about Durwood Fincher, I knew there had to be a lot of funny stories to tell.

I was right. I read the book this week.

I knew I would laugh and my goodness I did. Several times I laughed out loud. But I was not expecting the story of Mr. Doubletalk to make me cry.

And I was not expecting to be inspired.

The way I see it any book that can make me laugh and cry and inspire me to live at a higher level is well worth the time to read it.

I could relate to the story of Durwood Fincher on several levels. As a humorist and motivational speaker who has been on the circuit for a number of years myself, I could certainly relate to the behind the scenes stories. When Ed wrote of an event at the Golf Hall of Fame Village in St. Augustine, I smiled. And when he mentioned the Plantation at Amelia Island I smiled again. I’ve spoken at both of those places and have stories of my own.

And when I read of Durwood’s connection to the little Bibb Manufacturing Company village in Macon called Payne City, I could relate as well. On the outskirts of my hometown of Reynolds was a mill village called Taylor’s Mill owned by the same company. Not only do I have numerous lifelong friends who grew up in that village, but I know many who did very well in life who came from there. And on top of that, I married the daughter of a lady who grew up working in a similar cotton mill in Thomaston. I spent many Christmas days at my wife’s grandparent’s house right in the middle of that little mill village in Thomaston.

Like Durwood, none of my Taylor’s Mill friends or my wife’s family would trade their growing up years in those mill villages for all the tea in china.

Durwood Fincher is a funny man - a gifted and hilariously funny man. But after reading Ed Grisamore’s book about him, I now realize he is much more than that.

Durwood has baffled and entertained crowds for many years. You may have seen him on national stages such as Candid Camera, Regis and Kathy Lee, and the Today Show. He has earned the title of “Mr. Doubletalk.” And he has made a lot of money in the process.

Ed Grisamore did a masterful job telling his story.

You can order a copy of "Once You Step in Elephant Manure You're in the Circus Forever," by clicking on the link.

Order it and read it. You’ll be glad you did.
Posted by Bruce Goddard at 8:31 PM

I have met Durwood on several occasions. He has spoken to my company at least 2 times and maybe 3. One of his funniest bits was a thing he did with the Atlanta Braves's rookies. Great Guy!
George G

BRUCE...I WANT TO PERSONALLY THANK YOU FOR THOSE KIND REMARKS. IT'S OBVIOUS YOU KNOW WHERE I AM COMING FROM...LITERALLY.

LIFE SO STRANGE SOMETIMES. WHEN I WAS A KID I WAS ASHAMED TO TELL MY FRIENDS AT LANIER THAT I LIVED ON THE MILL VILLAGE. YOU KNOW WHY---KIDS CAN BE SO...HONEST. THAT WAS THEN.

NOWADAYS, I FIND GREAT PLEASURE AND STRENGTH BY SHARING THOSE WONDERFILLED YEARS OF YORE. PLUS, AS MY GRANDMA USED TO TELL ME...IT'S EASY TO TELL THE TRUTH---ALL YOU HAVE TO DO IS REMEMBER.

I AM CONVINCED THAT ED GRISAMORE HAS TRULY CAPTURED AND TAMED SOME OF THOSE MOMENTS THAT HELP ALL OF US GET TO WHERE WE SHOULD BE GOING. IT IS A GUIDE FOR NOT GETTING LOST.

THANKS BRUCE...WELCOME TO THE CIRCUS AND
WATCH YOUR STEP!!!

I am Durwood's high rise neighbor and friend. I have never encountered him without a smile on his face unless it was a face of sadness over the loss or sad circumstances of a friend. While I love his doubletalk and offer to help my favorite charity, one of the greatest gifts he gave me was when my 24 year old nephew and I ran into him in our condo parking garage. Within minutes he had entertained and then praised my nephew on returning to school and completing his education. More than 6 months later my nephew still talks about Mr. Durwood's advice and interest in his future.... another star in heaven for Durwood-- he is an incredible man whose talent is only exceeded by his heart. READ THE BOOK IT IS FANTASTIC Luanne C

""The Legacy of Eulan Brown"